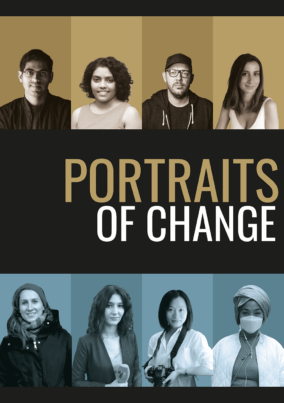 ‘Portraits of Change’, which features stories of how journalists and activists have initiated change through use of media as part of EPRIE.Labs – Media and Social Change theme. The book features portraits of EPRIE alumni, but also other journalists and media persons from EPRIE countries. The outcome is a riveting account for media persons on how to initiate and measure change.

The portraits are first person accounts of journalists and media persons including digital journalists like YouTubers who have in their way brought about change in their neighbourhood, community, city or country. They tell their stories and demonstrate how they used media for change, including social media, new media and mainstream conventional media.

The portraits are interviews or one-on-one conversations in which change makers share their story: What tools they use to be successful? What challenges they faced and tackled? What are their top recommendations? How to deal with failures? How they financed their projects? What do they recommend for foreign journalists who are reporting on social change in other countries and are not yet familiar with the local situation? Through these accounts the book demonstrates how other journalists and media persons can use media for social change and how to navigate through the fast changing media landscape.

The book features conventional journalists who report on issues from their own cities and countries for mainstream publications, but also include for example YouTubers who are initiating change using unconventional methods like a web series or Instagram videos.

The accounts will inspire and help others do something similar and learn from the experiences of the people featured. Some basic guidelines that change makers talk about are: You must have a message – what’s your story, what’s the issue. It doesn’t matter if it’s clear, but it must evoke a reaction. How they focus on targeting. How they leave room for discussion – let the people speak and engage.